As part of its Cyprus Artists Series, which is dedicated to the endorsement of leading Cypriot musicians, the Pharos Arts Foundation features a recital with the highly talented Cypriot bassoonist Mavroudes Troullos who will join forces with pianist Lily Maisky. Prize-winner in a number of competitions, including First Prizes in the Grand Prize Virtuoso International Music Competitions in Amsterdam, Paris and London in 2019, Mavroudes has appeared in such prestigious venues and festivals as Philharmonie in Paris, Royal Albert Hall, Concertgebouw in Amsterdam, and Festival Radio France Occitanie Montpellier, and he frequently teams up with prominent musicians, including the wonderful Lily Maisky.

Described by BBC Music Magazine as “an exceptional pianist”, and praised for her grace, vigour, and composure, Lily has appeared in recital in many of the world’s important venues – Vienna’s Musikverein and Konzerthaus, Hamburg’s Elbphilarmonie, New York’s Carnegie Hall, Tokyo’s Suntory Hall, and Teatro Colon in Argentina – and as a soloist, under the baton of celebrated maestros, including Leonard Slatkin, Thomas Sanderling, Gerd Albrecht, and Daniel Raiskin. For their recital in Nicosia, on Thursday 10 March, at The Shoe Factory / 8:30pm, Mavroudes and Lily will present an exciting and diverse programme of works for and transcribed for bassoon and piano, by Saint-Saëns, Bloch, Bartók, Verdalle, Hersant, Tchaikovsky, Scriabin, Rachmaninov, Piazzolla. 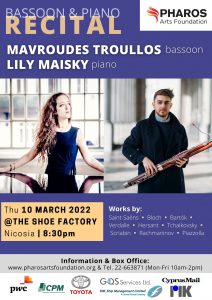