French cellist Marc Coppey first came to international attention in 1988, when at the age of 18, he won the First Prize and the Special Prize in the Leipzig Bach Competition. It was there he also first came to the notice of Sir Yehudi Menuhin, who invited Marc to perform along with him and Victoria Postnikova the Tchaikovsky Trio in Moscow and Paris – a collaboration documented on film by the eminent film director Bruno Monsaingeon. In 1989, Mstislav Rostropovich invited Marc to the Evian Festival and his solo career quickly took off thereafter. Nowadays, Marc Coppey is considered one of the leading cellists in the world, appearing as a soloist with numerous important orchestras and boasting an impressive discography, which has received great critical acclaim.

For their recital in Nicosia, on Wednesday 30 March 2022, at The Shoe Factory / 8:30pm, Marc Coppey and Peter Laul will join forces in an impressive programme comprising works for cello and piano by Beethoven, Shostakovich, Fauré and R. Strauss. 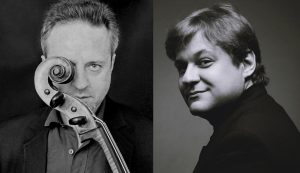