Cypriot cuisine is a combination of Mediterranean and Middle Eastern tastes, an amalgamation of textures and flavours that offers a gastronomic experience unlike anything you’ve ever had. From traditional family-run tavernas in the villages up in the mountains to modern, gourmet restaurants serving fusion cuisine, visitors are sure to get their fill of delicious recipes in the capital.

Local cuisine, prepared with the finest Mediterranean ingredients and served in portions bigger than average, is full of flavour and so we suggest you give all local delicacies at least one try. In Nicosia, there are numerous local tavernas in the old town- you’ll find some on the cobbled Onasagorou Street and some tucked in nearby alleys that serve the local fare with traditional live music – to give you an authentic Cypriot experience. Dining at a traditional taverna in Cyprus will have you wondering how many more plates will land on your table when you order the Cyprus meze. A local staple, the Cyprus Meze is much like having a private buffet on your table- it involves a series of plates (usually more than 10) that include a range of appetizers, dips and salads, main meat-based dishes and a homemade dessert served with locally brewed Cypriot coffee. Some of the appetizers arrive in the form of dips and include the Tzatziki (yoghurt with garlic, cucumber and olive oil), Tahini (crushed sesame seeds with olive oil, lemon and garlic), Taramosalata (fish roe, pureed potatoes with olive oil, parsley, lemon juice and onion) and Hummus (chickpeas and tahini). The main dishes consist of mostly souvla and souvlaki which is lamb, pork or chicken cooked on a skewer and garnished with oregano. The Cyprus Meze comes in two varieties, the Meat meze (recommendation: order when in the city or in the villages) and the Fish meze (recommendation: order if you are by the seaside). One might think that this style of dining is similar to tapas, but the portions here are much larger and the food is not exactly in the form of nibbles.

It is also recommended that you try the island’s local food in one of the capital’s villages up in the mountains, such as Palechori, Kakopetria or Kalopanayiotis, for an authentic culinary experience in a serene environment with food prepared with locally sourced fresh ingredients. In the villages you will also find local homemade sweets in the local cafes (kafeneia) such as the sweet-spoon glika tou koutaliou which are made of preserves of almond, date, apricot, cherry, grapes and many more and loukoumades, very sweet pastries made of deep fried dough soaked in honey syrup. Accompany your dessert with the local homemade lemonade – it’s very refreshing. Small shops will sell the traditional Cypriot sweet pasteli made of carob syrup and soutzoukos, made of grape juice and nuts on a string.

In the city centre, you will also find a range of restaurants serving Italian cuisine, with pizza and pasta dishes – many of which have an open kitchen where pizzas are freshly made in the large wood fire ovens. They also serve Mediterranean style pizzas that include local flavours and ingredients. Another big chapter in the capital’s gastronomy is Japanese cuisine and the culinary trend that goes by the name of sushi. Many locals are fans of the Japanese fusion cuisine, which is why you will find many restaurants serving sushi mainly in the city centre.

If you are on the go, grab a souvlaki or gyros, which the Cyprus version of a kebab – meat (usually pork or chicken) wrapped in pitta bread with salad. Or you can visit any of the local bakeries, there’s one almost around every corner in Nicosia and get one of the local pies, to include the famous halloumi cheese pie, round tahini pie or sausage pie. One of the town’s oldest bakeries is in the old city – open since 1948. Other typical snacks such as sandwiches are offered here in their king-size edition (compared to the range on offer at Europe’s delis), especially if you order the local “triara special” sandwich.

If you are lucky you’ll be in the capital when the Fork Food Market is taking place at the municipal park, a mobile food market regularly organised with approximately eight vendors offering enticing options with food from cuisines from all over the world such as the Caribbean. Food from their stalls comes at affordable prices. 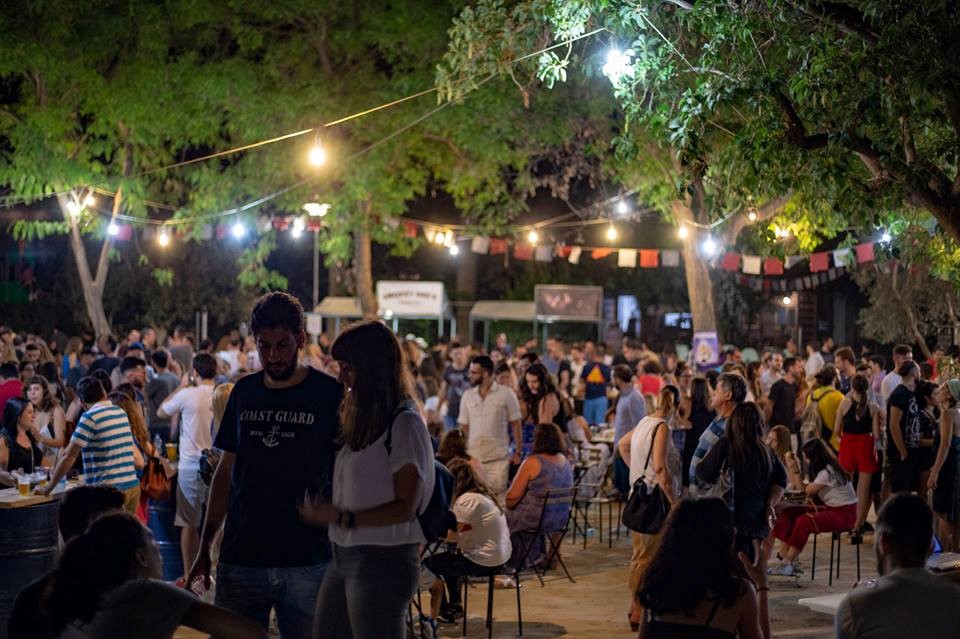